View basket “British Grasshoppers and Allied Insects (Laminated ID Chart)” has been added to your basket.

This Spiders fold-out guide features 40 common species of spiders in buildings and gardens.

This Spiders fold-out guide features 40 common species of spiders in buildings and gardens.

The guide features beautiful colour paintings of each spider by Richard Lewington. We have sorted these paintings by habitat, so you can quickly narrow down the choices. Use this guide to hunt for spiders in low bushes and vegetation, in flower heads, on outside walls and fences, in leaf litter and under stones, and even inside buildings.

As well as the paintings, the reverse side of the Spiders guide includes concise identification notes for each species. This text covers the key characters to look out for, plus house/garden habitat and web shape or hunting strategy. Even if you cannot find the spider that made it, webs are a useful clue. So we have also included line drawings that show a range of webs, including orb webs, sheet webs and tube webs.

Spiders are invertebrates, that is animals without backbones. They are not insects, but part of the class Arachnida. Apart from spiders, other arachnids include harvestmen, false scorpions and mites. With eight legs and two distinct body parts, spiders are easy to distinguish from the insects. In addition, all spiders can produce silk, using special body features called spinnerets.

Unlike insects, young spiders hatch directly from eggs. They look like miniature forms of the adults. They grow and reach maturity through a series of moults. Most British spiders live for about a year, although some may last much longer. Adult spiders are most numerous in late spring, late summer and early autumn. Spiders are less conspicuous in early summer, as many individuals are still immature.

This Spiders guide was produced in partnership with the British Arachnological Society. 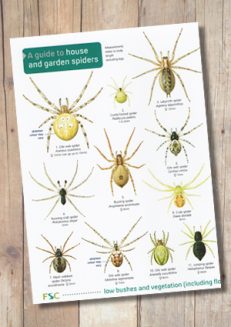