This Seashells guide features 40 common seashells found on the seashore in Britain and Ireland. Accompanying text describes how to identify each type of shell.

This Seashells guide features 40 common seashells found on the seashore in Britain and Ireland. Accompanying text describes how to identify each type of shell.

Shells are a common sight at the seaside. Why not take this seashells guide outside with you when walking along the beach? Great places to hunt for seashells include the strandline, beaches close to river estuaries and bottom of the beach at low tide. Meanwhile a completely different set of seashells occur on a rocky shore.

The animals that produce these seashells featured on this guide are all molluscs. This group of animals includes snails, slugs, mussels, octopus and squid. As a group, molluscs have no skeleton, so some produce a hard external shell for protection. Shell-bearing molluscs can be divided into two major groups: gastropods and bivalves.

Bivalves featured on the seashells guide include mussels, cockles, scallops, razor shells, oysters, venus shells and others. The gastropods include topshells, periwinkles, limpets, cowries and whelks. 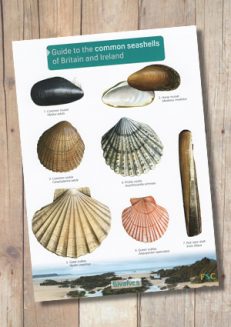 You're viewing: Guide to the Common Seashells of Britain and Ireland (Laminated ID Chart) £4.00
Add to basket