Covering 42 British species, this Longhorn beetles fold-out guide is the first popular guide for many years to these large and colourful insects.

Covering 42 British species, this Longhorn beetles fold-out guide is the first popular guide for many years to these large and colourful insects.

Beautiful colour paintings by acclaimed artist Richard Lewington show the key markings and body shape of each species. Text on the reverse side includes a comprehensive identification table, covering the status, distribution, habitat and size of the 42 longhorn beetles in the guide.

Although not as well known as butterflies, bees and ladybirds, the longhorn beetles are one of Britain’s most spectacular families of insects. Their distinctively long antennae help distinguish the group. The species found in Britain are generally large and stocky. Some grow as long as 55mm (not including the legs and antennae), while others can be as small as 2.5mm. Many are colourful and some species show interesting behaviour. The Wasp Beetle, for instance, is black and yellow in colour, and moves in a jerky motion. It is common in hedgerows and woodland.

Almost all longhorn beetles can be identified from live insects in the field. Most don’t even need a hand lens. Many longhorn beetles emerge as adults between May and August. Some species are active as adults as early as April. Hawthorn, when in blossom between April and June, attracts many species. Later in the summer, hogweed is very attractive to longhorn beetles. Flower-rich hedgerows, especially when close to woodland, can be a great place to hunt for longhorns!

This Longhorn beetles guide was produced in partnership with the National Longhorn Beetle Recording Scheme. 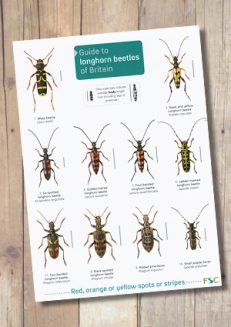