All 10 charts are laminated to make them splash-proof and robust for outdoor use. Clear colour illustrations and text by experts in the subject make these valuable resources for all age groups and abilities and is widely used by schools, community groups, wildlife volunteer groups and by staff and volunteers working for environmental organisations. These charts comes highly recommended and are fantastic value for money.

1. The only Identification Guide to British Butterflies you will ever need!
This 8-panel laminated identification guide is as you might expect, our most popular title. It is designed for speedy butterfly identification in the field.
Colour illustrations are arranged so similar looking species of butterfly are grouped next to each other to allow quicker and accurate identification. The guide includes all 57 butterfly species that you are likely to see across the whole of the UK. All of the illustrations are depicted at life size by renowned butterfly illustrator Richard Lewington. The text gives further background information on the life-cycle, habitats and feeding patterns of butterflies.

3. Day-flying Moths of Britain
Around 1500 species of moths are found in the British Isles, but most of them fly at dusk or at night. This 8-panel laminated fold-out chart concentrates on 103 species of moths which fly by day, including a few very common species that are not strictly day-flying but are regularly disturbed from vegetation.

4. Hawkmoths of the British Isles
Hawkmoths (family Sphingidae) are some of the most colourful and conspicuous moths in the British Isles. This 8-panel laminated fold-out chart has illustrations of the adults and caterpillars of all 18 British species (including the 9 resident species). Text on the reverse side gives valuable information to help you with hawkmoth identification, including for each species the regional distribution in Britain and Ireland, the main larval food plants and the time of adult emergence. Want to attract hawkmoths to your garden? Further information is given on simple steps that you can take.

5. Dragonflies and Damselflies of Britain
Sometimes called the ‘birdwatcher’s insect’, dragonflies and damselflies are large and charismatic insects with a distinctive flight pattern. Dragonfly and damselfly identification in the field can initially be daunting, but with practice most British species can be identified when in flight. This 12-panel laminated fold-out chart covers 16 damselfly species and 28 dragonfly species. Separate images are given for the male and female forms of most species. Accompanying text provides extra background information on life-cycle and feeding.

6. Bees of Britain
Produced in partnership with Buglife, this 8-page chart shows 28 species of bee, most of which can commonly be seen flying in domestic gardens. As well as the ‘Big Six’ bumblebees, the chart includes representatives of mining bees, cavity-nesting bees and cuckoo bees. Silhouettes next to each image show the typical life-size for each species. Text on the reverse side includes a table, with full cross-referencing to the images, which gives further information on flight periods, distribution of each species in Britain, and useful pointers to help distinguish between similar-looking species.

7. Ladybirds of the British Isles
Produced in conjunction with the UK Ladybird Survey, this popular fold-out chart to ladybird identification covers 26 of the 46 coccinellid species found in the British Isles. Information on colour pattern, habitat and distribution and hints to aid identification are provided in a comprehensive table. There are also sections on the life-cycle and feeding relationships of ladybirds.

8. Ladybird Larvae of the British Isles
Ladybird larvae are often found, but not well known, as they look so different from adult ladybirds. This new 8-panel fold-out chart with illustrations of the larvae of the 26 ladybird species featured on the earlier Ladybirds chart and a selection of photographs of pupae.

9. Shield Bugs of the British Isles
Shieldbugs look somewhat like beetles but have sucking mouthparts instead of mandibles and their young (called nymphs) pass through several moults, becoming more like adults at each stage. This 8-panel laminated fold-out chart includes colour illustrations of 45 shieldbugs and a table of identification characteristics. Coverage includes the families Acanthosomatidae, Cydnidae, Scutelleridae, Thyreocoridae, and Pentatomidae, as well as the ‘honorary shieldbugs’ from the family Coreidae. In this guide species have been grouped by appearance and where the nymph is distinctive it is shown as well as the adult.

10. British Grasshoppers and Allied Insects
This 8-panel fold-out chart covers the adults of the grasshoppers, crickets, bush crickets, ground hoppers, cockroaches, earwigs and stick insects found in the field in the British Isles. With full colour illustrations on one side, and text information on the other, it will allow you to make a positive identification quickly. 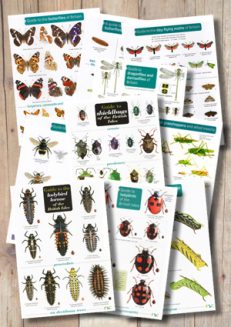